Not compatible with Windows XP (released 2001)

Windows XP / Server 2003 no longer receives security patches from Microsoft. It is unsafe to connect such a machine to the internet. If you are attempting to supply backup services to a customer in this situation, you should arrange to first upgrade their operating system with urgency.

Despite the above warning, our company would like to support as many platforms as possible. It might become supported in the future.

You can work around this issue by:

Visit our downloads page to obtain the latest copy of eazyBackup https://eazybackup.com/download/

You should now have a .zip file which contains the installer. Right click the .zip file and choose 'Extract Here'

"Do you want this app to make changes to your device?" Click Yes.

When you complete the install, eazyBackup asks for your account details the first time you open the program. 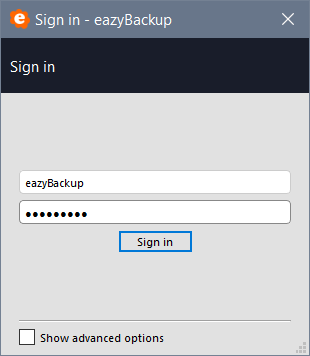 eazyBackup allows you to install and configure the software silently, by running install.exe /CONFIGURE=user:password via your remote management software.

eazyBackup 18.6.0 and later automatically create a Virtual Account (NT SERVICE\backup.delegate) with all necessary permissions to back up files on the PC.

Isolating eazyBackup under a Virtual Account is supported on Windows 7 or later, and Windows Server 2008 R2 or later when that server is not a Domain Controller. On other machines (e.g. Windows Server 2008 RTM, and domain controllers) the backup service will run as LOCAL SYSTEM by default.

On a Domain Controller running Windows Server 2008 R2 or later, we recommend configuring a Managed Service Account inside Active Directory for the backup service. This allows you to isolate the backup service permissions in a password-less service account. You should apply this to the backup.delegate service (but not the backup.elevator service, used for software updates).

The installer will safely remove and upgrade any prior version of eazyBackup, including those with a different software branding.

If the product name is changed as a result of the installation process, the newly-branded software may be installed into the old-branded directory name. You can avoid this issue by completely uninstalling and reinstalling the software.

You can silently upgrade the software remotely via the eazyBackup Server interface, or by running install.exe /S via your remote management software.

In eazyBackup 19.3.0 and later, if you customize the backup.delegate service to use any user account other than LOCAL SYSTEM or NT SERVICE\backup.delegate, your changes will be preserved in any future software upgrade.

In eazyBackup 18.6.1 and later prior to 19.3.0, such changes will be preserved. However, if the chosen user account requires a password, it may need to be reconfigured after the software upgrade.

Prior to eazyBackup 18.6.1, any changes to the service user account were not preserved across software upgrades.

The software can be uninstalled via the "Programs and Features" section in the Windows Control Panel.

During this process, you may be prompted whether you wish to preserve any username/password credentials saved on this computer.

You can also remove the saved credentials manually by deleting the AppData/Roaming/backup-interface/config.sys file.